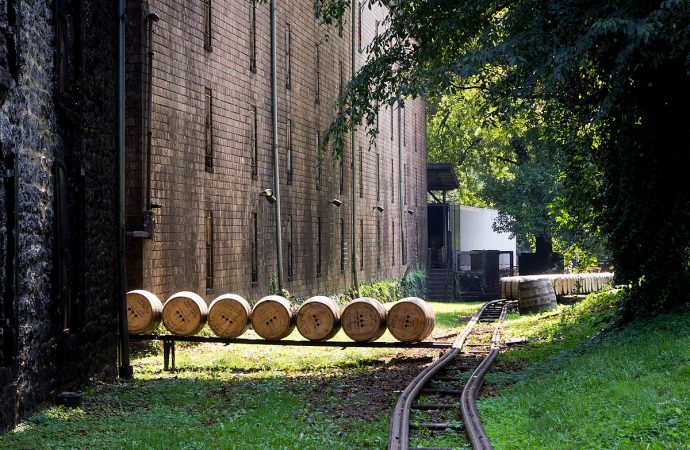 Whiskey industries outside the United States use new oak to a certain degree, but are heavily reliant on casks already used to make other booze, whether it be bourbon, sherry, port, wine, madeira or rum.- Shea Bethell

When it comes to whiskey and wood, two basic facts stick fast. First is that barrel maturation, that intricate dance of cask, climate and clock, often accounts for half or more of how a whiskey tastes by the time it reaches the bottle.

The second is that when it comes to those casks, the 53 gallon (200 liter) American Standard Barrel (ASB) dominates. This barrel type is the bedrock of American whiskey industry, where smaller barrels are the province of the craft sector and larger barrels almost unknown. Once the U.S. is done with them, those ex-bourbon barrels in their thousands travel to Scotland, Ireland and Japan, where they go on to become the bedrock for those whiskeys as well. The predominance of the ASB in world whiskey is so overwhelming that the next most common cask type, the hogshead, is usually built using ex-bourbon barrel staves. When Woodford Reserve is done with these barrels, they will go on to make whiskey again
(Credit: Richard Thomas)

Achieving The Standard
Although some Europeans claim the ASB is an evolution of the hogshead, any brief study of American whiskey history reveals this not to be the case. Instead, the ASB evolved hand in glove with the American whiskey industry itself, because, as with so many things, it was a product of experimentation, accident and meeting particular demands. Indeed, the barrel was still changing as recently as the mid-20th Century.

In the earliest days of whiskey-making, barrels traveled infrequently, and when they did travel it was rarely for long distances. As a result, they were all manner of shapes and sizes. Two events in Thomas Jefferson’s Presidency started the process towards a handy, standardized barrel into motion: the end of Alexander Hamilton’s whiskey tax and the Louisiana Purchase.

“Kentuckians had access to the Ohio and Mississippi Rivers and no financial penalty for storing whiskey in barrels for long periods of time,” said Chris Morris, Master Distiller at Woodford Reserve.  “So, now barrels began to be moved, and guess what, the bowed shape of today’s ASB was the best for rolling and turning corners.”

With mobility being an issue, size became one as well, and coopers began turning out barrels that balanced size and volume against ease of handling. Other early 19th Century experiences in the whiskey industry also contributed, such as the widespread adoption of charring the insides of whiskey barrels.

“During the charring process the interior temperature becomes very hot,” said Morris. “This allows for the formation of a rich layer of caramelized oak sugars just under the char. Small barrels will not reach the same temperature levels and will not have the same level of flavor developed.”

Next whiskey-makers discovered the merits of air circulation, which led Frederick Stitzel of Stitzel-Weller fame to patent the rickhouse design for whiskey warehousing in 1879. As it turns out, barrels need to be roughly the size of the modern ASB to make a rickhouse function as intended. Too big and the barrels are not just hard to handle, but also heavy enough to reduce the maximum height of the warehouse (today this would pose a problem for all the major distilleries save Four Roses, who uses one-story warehouses). Too small and the rickhouse loses its storage efficiency.

Yet it was not the modern 53 gallon barrel that emerged from this process, not at first. Instead, the 48 gallon barrel was the original ASB. According to bourbon historian Michael Veach, it was the pressure of the Second World War that forced the change. The war made white oak a scarce commodity, and larger barrels made better use of the rationed wood. The 53 gallon size was about as large as the existing rickhouses. Coming hard on the heels of the disruption of Prohibition and The Depression, the wartime change to 53 gallons was made, and it has stuck ever since.

How ASBs Came To Rule The World
Since the modern ASB developed as a key feature of American whiskey, distillers in the U.S. naturally look at it as the ideal vessel for aging whiskey.”The barrel fits our needs as an efficient way to utilize cooperage and warehouse space, said Michael Nelson, Brown-Forman’s Cooperage Plant Director. “We have also perfected the toast and charring process for the the current sized barrel.”

Yet a major feature of the ASB as it is used at home is that it is made with charred, new white oak. What is more, the Kentucky and Tennessee climate of warm, humid summers and freezing winters speed the absorption of the big wood flavors, such as vanilla.

Neither of these things are true in Scotland, Ireland, Japan, and often in other countries that make whiskey and rely heavily on used ASBs for aging their spirit, with over 90% of the whisky aging in Scotland resting in ex-bourbon wood. Instead, for these whiskey industries it is the ubiquity of the ASB that attracts them. Very little American whiskey is aged in used barrels (such as Early Times), so the main resale markets must necessarily lie elsewhere.

An important, illustrative point is that when it comes to ex-bourbon barrels, only a very modest amount of the Scotch made is matured using first-fill ASBs, and this whisky generally finds its way into the premium blends and single malts. Whiskey industries around the world might reuse ASBs two, three or even four times, and with each use there is progressively less flavor left in the wood. The vast bulk of Scotch whisky made is for mass market blends and comes from those much-recycled ASBs.

Once transatlantic shipping became cheaper, a huge supply of relatively inexpensive, used American barrels became available to Scotland, Ireland, Japan and other spirits industries as well, making them a very affordable option for an aging vessel. By contrast, a used sherry butt usually costs ten times as much as a used ASB, while holding just slightly more than twice as much, so the sheer economic logic of using ASBs in quantity is obvious.

But Why Used Wood?
Whiskey industries outside the United States use new oak to a certain degree, but are heavily reliant on casks already used to make other booze, whether it be bourbon, sherry, port, wine, madeira or rum. While cost is part of the reason this came to be, another reason comes back to the climate American whiskey-makers work in compared to that of their Irish and Scottish counterparts. A Jameson warehouse, stacked to the rafters with ASBs
(Credit: Richard Thomas)

“The warmer temperatures in the USA in summer compared to Scotland […] help produce a quick extraction,” said Stuart MacPherson, Master of Wood at The Macallan. “The style of straight whiskey, including bourbon, is very much this dark intense woody character, whereas Scotch whisky maturation, at much lower temperatures and sometimes in bigger casks, is a slower process with the contribution from the oak being less intense.”

Because of the climate, maturation processes based on time grow in importance relative to those based on wood. A case in point is the hogshead, which today is almost invariably built by taking five ASBs, breaking them down, and using the old staves to build four slightly larger hogsheads (225 liters), each with new barrel heads added. After the ASB, the most common whiskey cask used in Ireland and Scotland is the hogshead, often using ex-bourbon wood. Given the fiercer climate and faster maturation time in the U.S., the 12% increase in volume in a hogshead would significantly alter the maturation of the whiskey within, but in Scotland it makes only a slight difference.

“The only difference from a cask perspective is the addition of new ends, said MacPherson, “which will impart slightly more color and flavor, but this will once again depend on the toasting levels of the new wood [used in the] ends.

American Standard
Bourbon whiskey has enjoyed new heights in recent years, with exports topping $1 billion. However, that success underscores just how parochial the bourbon industry is, as the Scotch industry has exports valued at six times this figure. Underscoring both industries, however, is a key and common commodity, the foundation for whiskey-making around the world: the American Standard Barrel. For largely separate reasons, whiskey-makers around the world are dependent on American timber, coopering, and the barrels these produce.